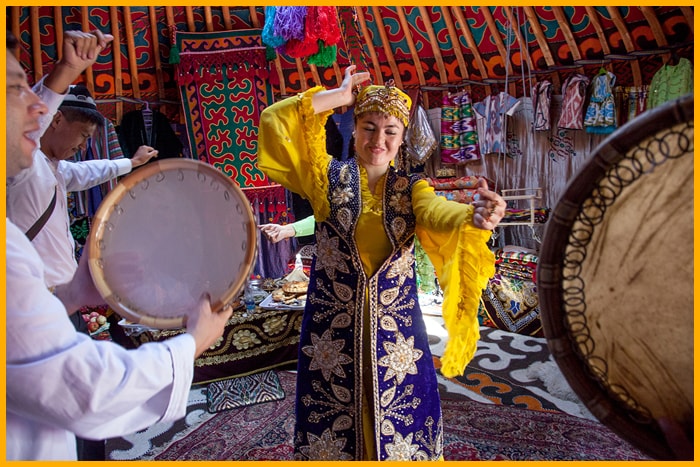 Day 1: Tashkent
This day you will be picked up by your guide at the airport and depart to Tashkent. This day you will be exploring significant sights of the city. You will walk in Independence square this square is the property of the Republic because it has a large number of attractions.  Further you will experience the local Broadway, here you can enjoy the wide street of the capital where you can also find souvenir shops. After that you are going to discover wonderful Tashkent metro, this metro is very picturesque and colorful, you will have the feeling that you are in a castle. It was opened in 1977. After you will walk in the old part of the city which includes: Chorsu Bazaar, Kukaldash Madrasah and Hast Imam complex, religious center of Tashkent. You  will feast your eyes upon the Othman Quran. This is a valuable copy of the Othman Quran that is stored in a special place and under special conditions. You will spend the night in the hotel.

Day 2: Tashkent - Nukus
After breakfast you will be transferred to airport. And will be met by your guide will meet you at the airport. You are going to depart today to Nukus. This day you will have a tour where you will visit amazing attractions. Your first destination will be It houses the most valuable collection of Russian avant-garde, the second largest after the Museum in St. Petersburg, the collection of paintings is truly the main Treasury of the Museum. The Museum was headed by Savitsky who was an excellent Director and began collecting works in 1960. He carefully concealed the forbidden works of artists and then exhibited them in remote central Asian art-house. Then you will direct to Mizdakhan necropolis. The history of Mizdakhan dates back more than one thousand years and the earliest settlement is attributed to the III-IV centuries BC., the local residents were followers of Zoroastrianism. After you will head on to a 2200 years-old Zoroastrian ancient monument known as Chilpyk. The overnight will be in the hotel.

Day 3: Nukus - Ayaz Qala - Tuprak Qala - Khiva
After breakfast you will depart to Khiva. The beautifully preserved city is an oasis near the Kara Kum desert, not far from Khorezm. The unsurpassed architecture of the city has been preserved to this day. The history and historical significance of Khiva go far back to the times when the Great Silk Road was not yet laid. According to legend, Zarathustra (Zoroaster), the founder of fire worship, was born here. True or not, this religion flourished here for 1.3 thousand years, starting from the IV century BC, influencing many religions of the world. In course of the tour you will discover two significant fortresses: Ayaz Qala and Tuprak Qala. Ayaz Qala is an ancient settlement that was located in the IV century BC on the territory of modern Uzbekistan. It is a unique archaeological site Dating back to the Zoroastrian era. Tuprak Qala is an outstanding monument of history and culture of our country. It is located in the lower reaches of the Amu Darya river, on the territory of modern Karakalpakstan. means ‘clay fort', was the royal city of Khorezmian ruler Artav. Archeologists claim that fortress was built in 1 or 2-century AD. It was occupied until 6th century AD. Continues wars and invasions exhausted the city and remained it without any sign of life. The night is in a hotel in Khiva.

Day 4: Khiva - Bukhara
After the breakfast you will drive to mesmerizing city Bukhara. One of the oldest cities not only in Uzbekistan, but also in Central Asia, Bukhara is a treasure trove of history and centuries - old traditions. The city is more than 26 centuries old. The ancient city still preserves centuries-old traditions and amazing rituals. Bukhara is often called the mainstay of Islam, as it is home to a huge number of mosques, minarets, and Muslim tombs. The city-Museum, like a magnet, attracts travelers from all over the world who want to look at the Eastern fairy tale in the open air. You will depart from Khiva to Bukhara by famous Kizilkum desert. En route you will direct along to Amu Darya river.  Called "Vakhsh", "Raha", "Ranha" or "Aranha" in the Zoroastrian Holy book, Avesta. After arrival to Bukhara you will have free time. Night will be in the hotel.

Day 5: Bukhara
After you will breakfast you will have a tour where you will interest sites. You will visit today Citadel Ark the oldest monument in Bukhara. According to archaeological excavations, the citadel belongs to the IV-III centuries. After you will observe Samanids mausoleum represents the beginning of a new era in the revival and development of Central Asian culture after the Arab conquests. After you will go to Chashma Ayub, the mausoleum was built over a spring that is considered sacred and healing among the residents of Bukhara. After you will direct to the shopping domes and then explore Nodir Divan Begi. Initially, the madrasah was built as a caravanserai. However, at the opening of the caravanserai, Imamkuli Khan (1611-1642), on the advice of Sufi sheikhs, congratulated his Minister on the construction of the institution "for the glory of Allah" and unexpectedly declared that the building is a madrasah. After you will visit Poi Kalon complex. You will spend the night in the hotel.

Day 6: Bukhara
This day you will explore the amazing sites of Bukhara. You are going to discover Bahauddin Naqshbandi complex. Bahauddin Naqshband (1318-1389) - also known as Shahi Naqshbandi and Khojai Buzur, one of the spiritual fathers of Sufism, is considered the founder of the Naqshbandi Sufi order.Since 1544, a majestic mausoleum has been erected at the resting place of Bahauddin Naqshband. After that you will discover Sitorai Mohi Hosa complex. It was erected in 1912-1918 by order of the last Emir of Bukhara, Mir said Alimkhan. Then you will explore the Sumiton village to find Chor Bakr memorial complex, this ensemble is a family graveyard of the powerful Djuybar sheikhs. The juybar sheikhs rose under Sheibanid Abdullah Khan. They and 10 other most influential Uzbek tribes helped him ascend to the throne of Bukhara. Then you will go to city. The nitght you will spend in the hotel.

Day 7: Bukhara - Gijduvan - Samarkand
In the morning you will hit the road to amazing ancient city Samarkand. Along the way you will break at Gijduvan village. This unique city is known all over the world for its pottery and ceramic craft. Gijduvan ceramics occupies a special place among the ceramic schools of Central Asia. A characteristic feature of Gijduvan ceramics is a solid Bay of dark green or brown glaze combined with the simplest engraved ornament. This decor is simple, but extremely original. The Gijduvan school of ceramics is distinguished by the use of various shapes and colors in ornaments, which convey the unique features and uniqueness of the culture of the Uzbek people. Then you will drive to Samarkand. You will spend the night in the hotel.

Day 8: Samarkand - Tashkent (transfer or train)
After breakfast you will have a transfer or train to Tashkent. In Tashkent you will lead to Courage Monument which is a memorial complex, it preserves the memory of that tragic event and thanks everyone who took part in the elimination of its sad consequences. After you will go to Zangi Ota memorial complex. Zangi Ota mausoleum is a magnificent building, with a minaret, the mosque of Namazgoh, patio and living cells. It was built in the nineties of the 14th century. You are going to explore today the State Museum of Timurids' history. There are 3,000 different items including jewelry, musical instruments, weapons, various coins, paintings, documents, historical manuscripts and clothing of Timurid's period. You will complete the tour with the State Museum of Applied Arts of Uzbekistan, where you will discover fine examples of glasses and national clothing, hand and machine embroidery, skullcaps and national fabrics, carpets and woodcarving. Your night will be in the hotel.

Day 9: Flight
In the morning is transfer to airport.