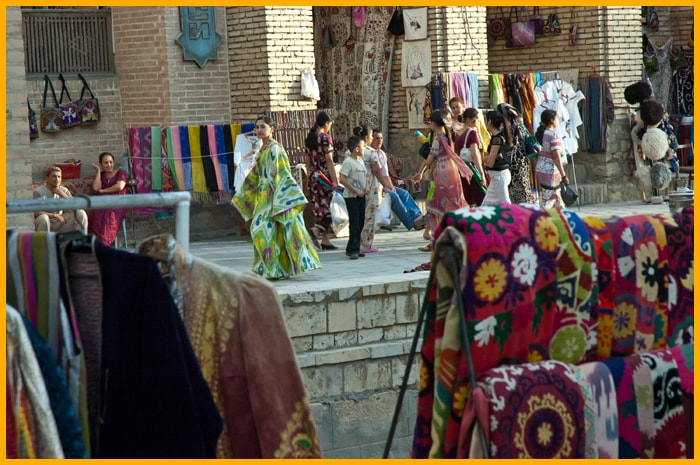 Day 1: Tashkent- Nukus
You are going to have today a morning flight to Nukus. This day you will fascinate a wonderful city and explore there sites. You will visit interesting attraction the Museum of Savitsky. A picturesque collection of the Russian avant-garde, known among Central Asia. And I am the second most important after Saint Petersburg. The Museum collects banned Soviet-era paintings. And stores works of Sokolov, Komarovskiy and Amaravella group. Igor Savitsky began collecting works in 1960 and carefully kept and exhibited them in the remote central Asian art-house. Then you will observe outside of Nukus to see Mizdakhan necropolis this is a complex of historical and archaeological monuments located on three hills and a plain between them. You are going to visit a 2200 years-old Zoroastrian ancient monument known as Chilpyk. The overnight will be in the hotel.

Day 2: Nukus - Khiva
After the breakfast you will have a morning transfer to Khiva. This day you will explore enchanting landmarks of the city. The tour route will take you to inside of Ichan-Qala. T he fortress of Ichan-Kala has been preserved almost unchanged to our time. The Ichan-Kala fortress is not just a defensive structure, but a real city-Museum. The complex has about 400 residential buildings and 60 architectural monuments. There are situated ancient buildings, palaces, mosques, Madrasahs, Mausoleums, Minarets, Caravan-Sarais and Bathhouses. After you will explore the prominent attraction the Kunya-Ark fortress. Once the fortress consisted of the Khan's office, reception hall, harem, winter and summer mosque, mint and outbuildings - stables, warehouses, workshops. You will spend the night in the hotel.

Day 3: Khiva - Bukhara
After the breakfast you will hit the road to remarkable city of Uzbekistan Bukhara. Noble Bukhara is considered a cult city of Central Asia. Great artists and scientists were born here and worked fruitfully: Omar Khayyam, Ibn Sina, Rumi Jalaleddin, Firdousi, Alisher Novai, Rudaki, N. Ganjevi, Dakiki and others. The uniqueness of Bukhara is that since the V century BC, its borders have not changed. The historical part is included in the UNESCO list to be protected as a World Heritage site. There are narrow streets, green parks and gardens, historical and architectural monuments belong to different epochs, but locate very close to each other. You will transfer from Khiva to Bukhara goes via amazing Kizilkum desert. En route you will be amazed the view to Amu Darya river. On arrival you will have a free time in Bukhara. Your night will be in the hotel.

Day 4: Bukhara
This day you are going to have a city tour of sacred city Bukhara. You are going to discover Citadel Ark. On one of the walls of the fortress hung a large leather whip (Kamcha) - a symbol of power in the Emirate of Bukhara. The citadel lay in ruins for some time, until it was rebuilt in the seventh century. Further you will discover Samanids mausoleum, family tomb and one of the ancient architectural masterpieces of the Uzbek city of Bukhara. You will proceed your tour with Chashma Ayub, this place of worship was named after Saint Ayub (the prophet job from the Bible). After you will explore the shopping domes and discover visit the most famous madrasahs of Bukhara called Nodir Divan Begi the most interesting architectural monument of the Middle ages in Central Asia. This is a harmonious part of the historical complex of Khoja Ahrar. In the end of the tour you will discover Poi Kalon complex, here is the tomb of the khans Arslan, Uybadully and of Sheikh Miri-Arab. The mausoleum is recognized as a UNESCO world heritage site. Your night will be in the hotel.

Day 5: Bukhara - Samarkand
Today you will lead to Samarkand. Samarkand is a treasure trove of culture of the peoples of the East, where unique monuments of medieval architecture in beauty and architectural forms have been preserved to this day. This day you are going to discover following objects such as: Registan square, Shakhi-Zindeh, Mausoleum Guri Emir and Bibi Khanum Mosque. At the beginning of the XV century, one of the most significant architectural ensembles of the medieval East-Gur - Emir-was built in the South-Western part of Samarkand. The Cathedral mosque, which according to legend was named after the beloved wife of Amir Timur. The majestic blue domes of the Bibi Khanum mosque are an extraordinary sight. Shakhi-Zindeh a unique ensemble of ancient tombs (1370-1449 years), located near the ancient settlement of Afrasiab. It is also called a cemetery street. The night will be in the hotel.

Day 6: Samarkand - Tashkent
After breakfast you will be transferring to Tashkent (train). This day you will discover fabulous sights of the capital. You are going to visit Independence square located in the heart of the city of Tashkent. This is a favorite holiday destination for residents of Tashkent and this was facilitated by the fact that the square is home to the most beautiful fountains in the city. After you will be walking along thelocal Broadway, it unites 2 of the most important and beautiful squares of the capital: Amir Temur square and Mustakillik square. After you will direct to Tashkent metro, this metro is one of the most beautiful places in the world. After you will experience different sites of old part of the city: Chorsu Bazaar, Kukaldash Madrasah and Hast Imam complex that consists of several madrasahs, mosques and mausoleum. And you will also see the Othman Quran. Night is in a hotel.

Service does not include:
- Visa
- Full board
- Travel insurance
- English speaking guide
- Entrances to all museums
- Flight tickets Tashkent - Nukus