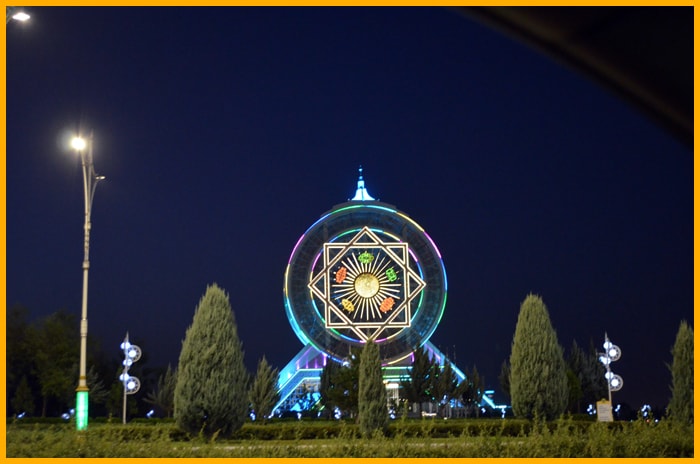 Day 1: Ashgabat
After landing you will meet with the local guide at the Ashgabat International Airport. The entire day is dedicated to a sightseeing tour. The year of Foundation of Ashgabat is considered to be 1881. 25 km from the border with Iran, Ashgabat is located at the foot of Kopetdag hill. The name of the city comes from the Arabic 'ashk' - love and the Persian 'Abad' - city. This day you are going to discover such landmarks as: Lenin's square, Park of Independence (looking like a white-marble "Eiffel Tower" standing in a beautiful park), Arch of Neutrality. You will also visit Museum of Ethnography and Museum of Fine Arts. Night will be in the hotel.

Day 2: Ashgabat - Kow-Ata
After breakfast you will transfer to healing lake Kow-Ata.  There is an underground lake in the giant baharden cave. Lake Kov-ATA is very unique and is called by locals as a wonder of the world. the water in the lake is the same all year round 33-37 degrees. The lake translates as "the Father of caves". The healing water contains about 38 elements that can cure various diseases. The overall length of the cave is 230 m, its height reaches 20 m, and its width is at some points 57 m. (it is recommended to swim in the lake).

Day 3: Kow-Ata - Nokhur
After breakfast you will be driving to amazing place Nokhur. Nokhur is considered one of the most beautiful places on earth, although the path to this cherished place is harsh, coming here you can see not only the beauty of nature. But also the magnificent architecture, which was carefully passed down through the years. With four sides closed this settlement of the mountains. It is home to the local population of the Nokhur tribe, who still has their own culture and traditions. And the flora and fauna of this place abounds. According to legend, the name of the place comes from the biblical prophet Noah, whose ark was moored at the foot of mount Monoman.

Day 4: Nokhur - Darwaza
After breakfast you will transfer to explore the fascinating site Darwaza. Darvaza is an amazing attraction of Turkmenistan, and it is amazing because it is a gas crater that has not been extinguished for more than 40 years. The people called it the gateway to hell, and all this is for a reason, since the diameter of the funnel is more than 60 meters, the depth is about 30 m. This is one of the best places to visit. It is very exciting to watch the spectacular blaze of fire in the daytime and evening, enjoy the warm breeze and generally amazing nature of the area, because the crater is located right in the heart of the Karakum desert. You will spend the night in the tent and enjoy the nature.

Day 5: Darwaza - Ashgabat - Nisa - Horse farm - Ashgabat
This day you will start your transfer to capital Ashgabat. After arrival you will transfer to Nissa fortress - the ancient city of Parthians, whose ruins are located 18 km from Ashgabat near the village of Bagir. In 2007, Nisu was included in the list of UNESCO world heritage sites. Aftre you will move to horse-farm where you will feast your eyes upon amazing animal the gem of the country - Akhal-Teke horses. In course of the tour you will drink Traditional Tea, while observing a short Akhal-Teke horse show program and the racks of horses. After that you will return to Ashgabat. Night will be spent at the hotel.

Day 6: Flight
In the morning is transfer to airport.