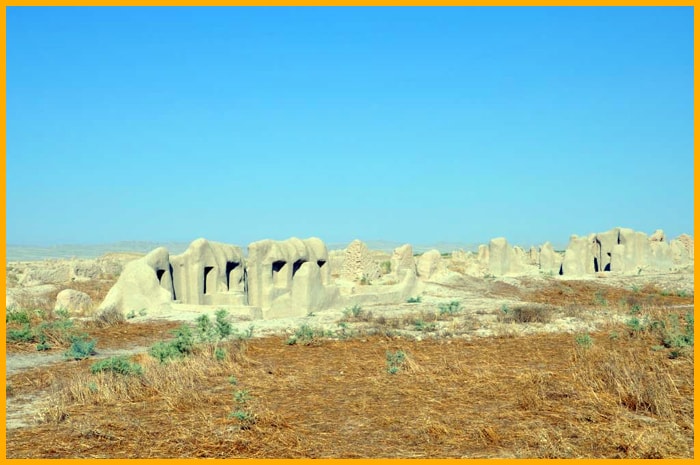 Day 1: Ashgabat
After being welcomed by the local guide at the Ashgabat International Airpor you will transfer to capital of Turkmenistan Ashgabat. Today you will get acquainted with the highlights of Ashgabat. The city is the largest industrial, scientific and cultural center of the state. Capital entered the Guinness world records list in 2013 for its white marble buildings. The city's population exceeds 1 million people. In course of the tour you will discover  of Lenin's square, Park of Independence (looking like a white-marble "Eiffel Tower" standing in a beautiful park), Arch of Neutrality. Afterwards we will visit Museum of Ethnography and Museum of Fine Arts. You will spend the night in the hotel.

Day 2: Ashgabat - Kow-Ata
After breakfast you kick start to enchanting land of Baharden cave to explore Kow-Ata underground lake that is situated 107 km from Ashgabat. This is a lake with thermal waters that treat various diseases of the body. The lake is translated as the father of caves, and sometimes even miracle cave. Water contains 38 useful chemical elements. The water temperature of 33-37 degrees does not change all year round. Residents from all cities of Turkmenistan try to swim in the lake and you also have this opportunity.

Day 3: Kow-Ata - Nokhur
After breakfast you head to Nokhur. This settlement is one of the most fascinating and memorable in Turkmenistan. Its visit leaves no one indifferent and remains forever in the memory of the tourist. This place is hidden from prying eyes among the 4 sides of the mountains. According to legend, the name came from the prophet Noah, who planted seeds here from the ark's reserves and released the animals. Therefore, this land is full of flora and fauna. this place is inhabited by the Nokhur tribe and has its own architecture and customs.

Day 4: Nokhur - Darwaza - Dashoguz
This day you will hit the road to mysterious Darwaza. This unique well appeared after geologists discovered an extremely promising gas field near the village of Darvaza in 1971, because Turkmenistan occupies one of the leading places in terms of gas reserves in the world. You can visit one of the most spectacular places in Turkmenistan, enjoy moments of peace and quiet, watching the lights from the gas crater. Then you will transfer to Dashoguz. You will spend the night in the hotel.

Day 5: Dashoguz - Kunya Urgench - Ashgabat
After breakfast you will be driving to Kunya Urgench, explore amazing landmarks: Old Urgench, Khorezm capital X-XII centuries. During the tour, visit the Mausoleum of Najm al-Din al-Kubra, TyurabekKhanum, Il-Arslan, Tekesh Ibn Hadzhibey, the highest minaret in Central Asia KutlygTimur. After you will head on to Dashoguz local airport, departure  to Ashgabat. Your night will be in the hotel.

Day 6: Ashgabat - Merv - Mary
This day you will begin your adventurous tour to the east of Turkmenistan to visit fortress Abiverd with continuing to Ancient Merv. The remains of the medieval settlement of Abiverd are located in the middle of the road between Ashgabat and Mary. An ancient city of the Sassanid era, located on the territory of modern Turkmenistan. In course of the tour you will discover the ruins of the 15th century Seyit Jamal-ad-Din Mosque. In the middle ages, Merv was one of the most important cities in Islam, the capital of the Seljuk Empire, a bustling commercial center with a population of hundreds of thousands. When you will come to the city you will have a city tour exploring: Gyz Gala, Erk Gala, Soltan Gala, Soltan Sanjar Mausoleum, Ibn Zeid Mausoleum. After you will transfer to Mary. Night will be in the hotel.

Day 7: Mary - Ashgabat - Nissa - Horse farm - Ashgabat
Today you will drive to the airport then you will fly to Ashgabat. In course of the tour you will visit Nissa fortress. New Nisa was the capital of the Parthian state, and the fortress of Old Nisa was the Royal residence. The unique ruins of the fortress were protected by UNESCO in 2007. After you will transfer to Gokdepe region and be amazed by horse farm where you will observe gem of the Turkmen people - Akhal-Teke horses. You will see breathtaking short show that will be shown by riders. After you will drive back to Ashgabat. You will spend the night in the hotel.

Day 8: Flight
In the morning is transfer to airport.